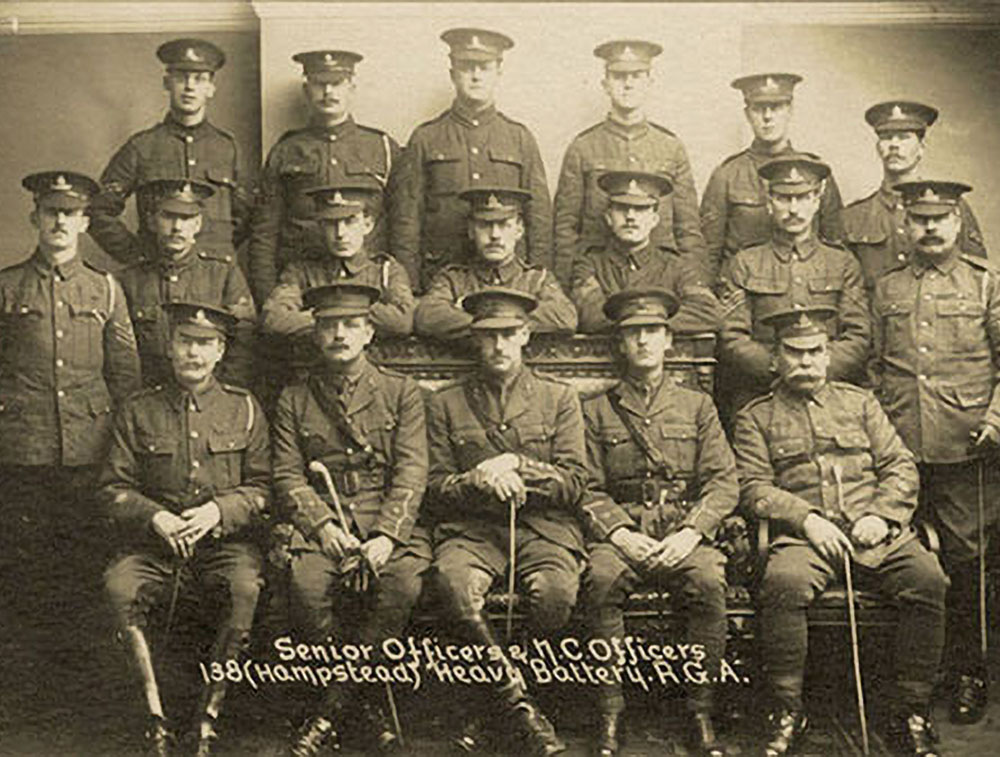 This article was written by U3A as part of a Shared Learning Project with Wac Arts.

Reading through the records of meetings of the Hampstead Vestry, later renamed Hampstead Council, gives a revealing snapshot of the local area and the country as a whole over almost a 90-year period.

The minutes, covering council meetings held from July 1878 to March 1965, are preserved in large leather-bound volumes at the Camden Archives in Holborn. Luckily most are type-written, although the earliest ones are in beautiful copper plate writing.
The minutes for one of the last meetings to be held at the old Vestry Hall in 1878show that councillors turned down an offer from a promoter for a “Negro troupe performance” to entertain local citizens.

Recorded at the very last meeting, in June 1878, was that “Sergeant Rowbottom and his wife had been appointed caretakers for the new building at a weekly wage of 30 shillings.”

It’s odd that the records of the first meeting held in the new Town Hall, on July 4, 1878 do not mention the move. At that meeting the council agreed “to let the Vestry Hall to the St John’s Chapel Committee for Divine Services during repairs of their chapel.” The hire charges were £1 and 1 shilling a day, plus 10 shillings and six pence for an evening service.”

The next year the council gave no reason for refusing “the use of a room for Miss Bradshaw’s bible class on Sundays.”

In January 1880 the minutes show that the wages of Benjamin Hall, a town hall messenger, were to be increased from 24 shillings to 26 shillings a week.

Illustrating that the council took an interest in foreign as well as local affairs, in July 1881 a letter of condolence was sent to the United States legation in London following the assassination of American President James Garfield.

There was a great deal of discussion in the years running up to the First World War, when the women’s suffrage and suffragette movements were growing increasingly active. In 1912 the council refused a request from the Hampstead Women’s Social and Political Union to hold a series of lectures “on different aspects of the women’s movement” at the Town Hall.

When some ratepayers appealed for a change of heart, the minutes show that their request was refused “in view of the disturbances which had occurred in various parts of London in connection with the women’s suffrage movement, and that there would be a risk of damage to the building and its contents.”

Further protests against the ban were received from the Hampstead Fabian Group, the Conservative & Unionist Women’s Franchise Association, who sent a delegation to speak to councillors in July 1914, and the Hampstead branch of Free Church League for Women’s Suffrage. Their protests all fell on deaf ears.

When in October 1914 the first council meeting was held after the outbreak of the First World War, in July of that year, the session began“with a patriotic rendition of the national anthem.”The minutes also show that “it was agreed that the request to hold suffragist meetings at the town hall should still be refused and referred back for a full discussion three months after the end of the war”- which many people wrongly thought would not last very long.

The impact of the war featured strongly in records of council sessions held between 1914 and 1918. At the October 1914 meeting, it was reported that Mr Garrod, the building’s caretaker, had been called up for military service, so a new night watchman “was to be engaged during his absence at £1 16 shillings and 6 pence per week.” Temporary staff were also appointed to replace Mr E A Cave, rates collector, District D, “who has enlisted in the Queen Victoria Rifles.”

It was also revealed that “The War Office has requisitioned seven of the council’s horses and seven water carts and harnesses for military purposes.”

There were repeated reports of the deaths in action of council staff and councillor’s close relatives. For example, the September 1915 meeting recorded that” Captain Payne, the only son of Councillor Payne was killed in action in France on Saturday last”. The October minutes stated that “H.P. Bevis, 4th assistant in the central library, who enlisted in September 1914 has been killed in action.” The following month reported the death of the cemetery gardener A G Upton, as well as the son of Councillor Tomblin, both “on active service in France.”

In May 1916, as the war dragged on, a motion requesting that the council do not employ anyone who had applied for Conscientious Objector status was carried.

In December that year, the death in action in France of 2nd Lieutenant Charles E. Hudson of the Middlesex Regiment, a former clerk in the Town Clerk’s department, was recorded. The minutes show that councillors “passed a vote of deep sympathy for his widow and family.”

With the danger from German aerial bombing, first from airships and them from aircraft, in October 1917 the minutes show that it was agreed “to purchase illuminated signs indicating ‘Take Cover’ and ‘All Clear’ in connection with air raids – such signals to be operated by Police – at a cost of £99 each, including one set to be placed at the Town Hall.”

Due to massive British military casualties on the Western Front, at theFebruary 1918 meeting, nine months before the end of the war, the council agreed “to exhibit recruiting posters outside the Town Hall for the 1st Cadet Battalion Royal Fusiliers. It was also reported that Lt. Fleetwood C. Pritchard, son of former mayor and Alderman Clive Fleetwood Pritchard, “had been awarded the Military Cross while serving in Flanders.”

The December 1918 minutes show that the day after the war ended, on November 11,“a telegram of loyalty was sent to the King on the signing of the Armistice.” In June 1919 the Council agreedthat the sum of £200 would be allocated “for decorations and illuminationsto the Town Hall in connection with local peace celebrations.”

There is a poignant postscript to the war. In July 1915, the then Mayor of Hampstead, Alderman Ernest O’Bryen, decided to raise a battery of heavy artillery – the 138th Heavy Battery Royal Garrison Artillery. It was formed from volunteers, many of whom lived in the Borough of Hampstead. Most of the battery’s initial training took place on Hampstead Heath and it soon became known as “The Hampstead Heavies” and went on to suffer a huge number of casualties in France and Belgium.

The January 1920minutes show that a letter of thanks had been received from the Hampstead Heavies Old-Comrades Association, after the Councilagreed to let the Association hold its inaugural meeting at the Town Hall. The meeting was attended by 70 war veterans.