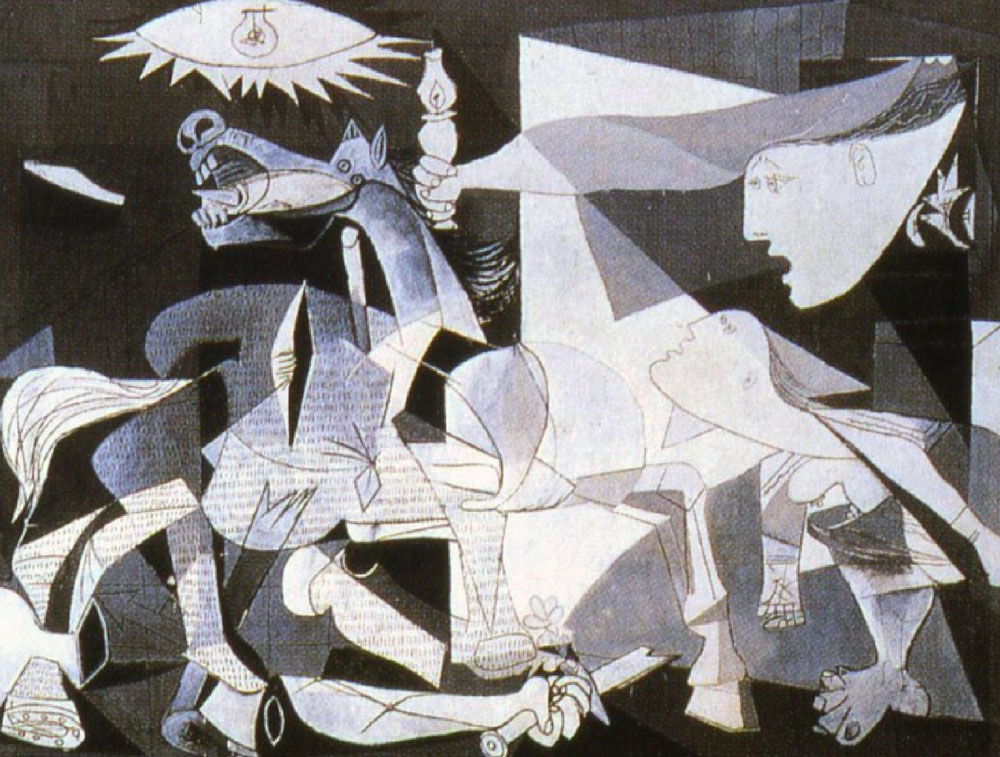 Guernica is a town in the Basque region of Spain. On 26 April 1937 General Franco asked the German Airforce to bomb the town. Before the Second World War, the German Airforce was keen to test their aeroplanes and flying skills and happy to oblige a leader they knew shared Hitler’s ideology.

The attack became one of the first war crimes against civilians to capture global attention. The town had no military importance and no soldiers were stationed there. There was a small munitions factory but that was not targeted and was unharmed. The majority of people who died were women and children. Not only did the planes drop fire bombs but they flew as low as 600 feet and used their guns to shoot down fleeing people.

The number of victims is still disputed. Franco denied the Basque government’s reported 1,654 people killed and the town was so violently destroyed many people died later in hospital or their bodies were lost in rubble of the devastated buildings so it was hard to count the dead. He also denied that the bombing took place, claiming that the Basque’s had destroyed the town themselves.

Noel Monks was a war reporter working for the London Daily Express newspaper and was the first reporter to reach Guernica after the bombing. This is what he wrote. 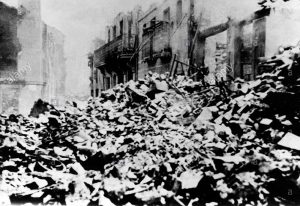 Photograph of Guernica after the bombing

“I was the first correspondent to reach Guernica, and was immediately pressed into service by some Basque soldiers collecting charred bodies that the flames had passed over. Some of the soldiers were sobbing like children. There were flames and smoke and grit, and the smell of burning human flesh was nauseating. Houses were collapsing into the inferno. In the Plaza, surrounded almost by a wall of fire, were about a hundred refugees. They were wailing and weeping and rocking to and fro. One middle-aged man spoke English. He told me: ‘At four, before the market closed, many aeroplanes came. They dropped bombs. Some came low and shot bullets into the streets”.

The only things left standing were a church, a sacred Tree – symbol of the Basque people -and, just outside the town, a small munitions factory. There hadn’t been a single anti-aircraft gun in the town.”

Pablo Picasso painted Guernica in June 1937 little more than a month after the town was destroyed. He was living and working in Paris where the painting was first displayed; when the Nazi’s invaded France and took control of Paris, he stayed and sent the painting to America. There is a story that his studio was searched by the Nazis and their commander waved a photo of the painting at him, demanding to know if he had painted it. “Did you do this?” he said and Picasso replied “No, you did.”

Picasso swore the painting would not return to Spain until Franco’s rule was over. It is now in a museum in Madrid. It is regarded by many people as one of the most moving and powerful anti-war paintings in history, and is one of Picasso’s best known works.

Picasso worked on the enormous painting for 35 days. Standing at 3.49 meters tall and 7.76 meters wide, the painting shows the suffering of people and animals wrenched by violence and chaos. Prominent in the composition are a gored horse and a bull – animals which Picasso often used to symbolise Spain – screaming women and flames. He deliberately did not use colour.

It was exhibited in the International Paris Exhibition in 1937 in the Spanish Pavilion with an equally enormous photograph of Republican soldiers and the slogan: