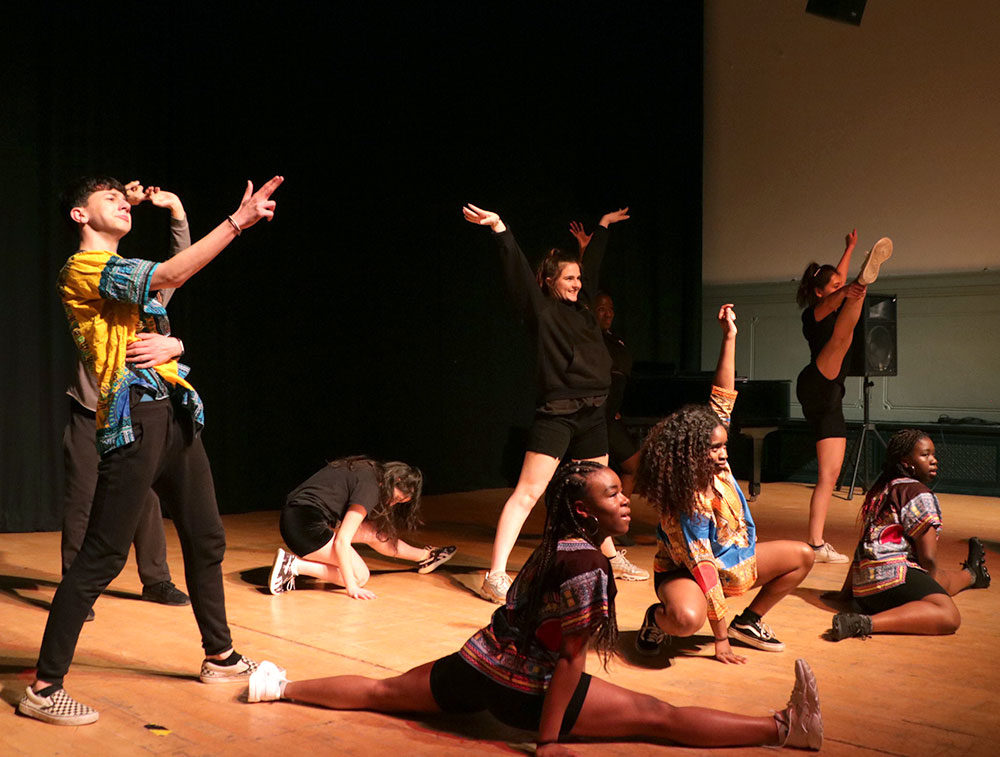 March was Showcase Season at Wac Arts, with young people from our programmes having the opportunity to share their work from the past term. Senior Wac Arts kicked the season off with their Open Mic Night and Monologue Slam before ending the month with the Senior Wac Arts Presentation Night; a great opportunity for family and friends to come and watch what the budding performers have been developing their skills in over the past term. Meanwhile, our third and second-year full-time students took to the stage at the John Lyons’ Theatre and here at Wac Arts in their series of Showcases, highlighting different aspects of their training on the course so far. Keep reading to relive our highlights and favourite performances from this busy time at Wac Arts.

Following the amazing talent on show at the Open Mic and Monologue Slam evenings, we could not wait to see what would happen at Senior Wac Arts’ Presentation Night – and we were not disappointed. The audience got a real flavour of the uniqueness of Wac Arts, with the performances split into two very different audience experiences. The first half of the night was an immersive, site-specific happening with the young people showcasing their work in different spaces around the Atrium and the corridors of Wac Arts. This was a fascinating way of exploring and celebrating the Heritage of the building whilst also highlighting the excellence of the young people who hone their talents in the Old Town Hall.

The evening started with everyone gathering in the Atrium for a beautiful group song before the guests were encouraged to explore the spaces and watch the different performances happening in each one. Aerial students performed an amazing display on both hoops and silks, demonstrating tremendous strength and control. It was beautiful to watch as the movements flowed together with the music. In Music Tech, there was a chance for our visitors to listen to some beats and tunes created by our budding producers, while next door our visitors had the chance to watch a short film by the Film-Tech students. In the drama studios, the audience enjoyed a short physical theatre performance before being given the chance to choose for themselves the monologue they wanted to see performed. By putting them in charge of what they wanted to see, guests could create their own unique experience across the evening. After an hour of exploring our visitors were told to gather in the main hall for a finale performance which consisted of singing and dance performances.

The evening drew to a close with a performance in the Main Hall from our singing groups, Physical Theatre Level Two and Professional Approaches to Drama, before finishing off with an incredible and fun Afro-Fusion dance. Students shared the piece they previously performed in March at the Move It Dance Festival, and it was as vibrant as the young people who attend Wac Arts. Following the last performance, Senior Wac Arts students were invited to collect their certificates, including presentation of the Peter Brinson, Jack Petchey and Celia Greenwood Awards. Huge congratulations to all involved.

Meanwhile, Wac Arts Diploma students were also busy showcasing their work with four performances; three by the final-year students and one sharing of the second-year students work. The March Showcase season was a huge success as all of our third-year students have now received interest in representation from agents. This is a fantastic triumph four months ahead of their graduation in July and is a testament to their hard work and talents.

The season began with the Third Year Singing Showcase at the John Lyons Theatre at City Lit. The audience was thrown into the show with a captivating and powerful duet sung by Anais Lane and Dominic Simpson (‘First Date Last Night’ from the Off-Broadway musical Dogfight). Other performances included ‘Roxie’ (Chicago) sung by Daniella Vieco and ‘Out Here On My Own’ (Fame) sung by Jessica-Leigh Porteous, who both confidently filled their numbers with personality. The Third Year Drama Showcase, saw the students perform a series of monologues from Neil LaBute’s Bash, interspersed by other monologues from the likes of Shakespeare, Oliver Lansley and Che Walker. A notable performance was made by Daisy May as her bold and serious tone captured the audience’s attention during her ‘My Short Skirt’ monologue (The Vagina Monologues). Tareek Simpson’s monologue from Bash by Neil LaBute showed what a dynamic performer he is whilst Vivi Diwantesa shone in the King Hedley monologue by August Wilson; her performance was simply mesmerising.

On March 28th, the Second Years performed a compilation of drama, singing, and dance pieces that they had been working on throughout the term. The dance included a fast-paced and upbeat range from lindy hop, hip hop, and tap, while their Indian song performances showcased both their versatility as performers and the wide breadth the course syllabus covers. It was the drama performances from ‘The Cinderella Waltz’ that truly stood out however, with the audience bursting with laughter at the portrayal of this modern twist on the Cinderella tale.

Later that evening, the final year students wrapped up the season on home turf at Wac Arts with their Mixed Showcase, including various ensemble musical pieces as well as songs and monologues that were performed in the previous showcases. Dominic Simpson had an attention-grabbing performance with the light-hearted monologue from ‘You’re a Good Man, Charlie Brown’, as he played the lovable character Charlie afraid of sitting alone at lunch. The performers ended the night with a delighted and applauding crowd after their vibrant Lindy Hop performance – everyone wanted to get up and join them on the stage.

As we head into the last term of this academic year, we are looking forward to the next show our Diploma students will be performing. We are delighted to announce this will be Lin Manuel-Miranda’s ‘In the Heights’, which will be directed by Wac Arts alum and award-winning Playwright and Director Che Walker. Che is known for working with urban and socially challenging topics, and as an engaged alum, he serves as a teacher, artist in residence, and advocate of Wac Arts.

‘In the Heights’ is a Tony and Olivier Award-winning musical that takes place in the predominately Hispanic-American neighbourhood of Washington Heights, New York City. The musical tells the story of a store owner watching the joys and heartbreaks of those in his close-knit community as they pass through his bodega. The Diploma students ended their term with a promo shoot for the summer show and will go into rehearsals in June. Shortly after the show in July, our Final Year Diploma students will be graduating from the programme and it will be their time to shine out in the professional arts world – we can’t wait to see what they do next.

Reservations for tickets for ‘In the Heights’ will be available from mid-May. Keep an eye on Wac Arts socials and the website for more information, or sign up for our Newsletter to be sure you don’t miss a thing!

previousWac Arts runners have raised a fantastic £8,000 so far!
nextWac Arts at Move It 2019