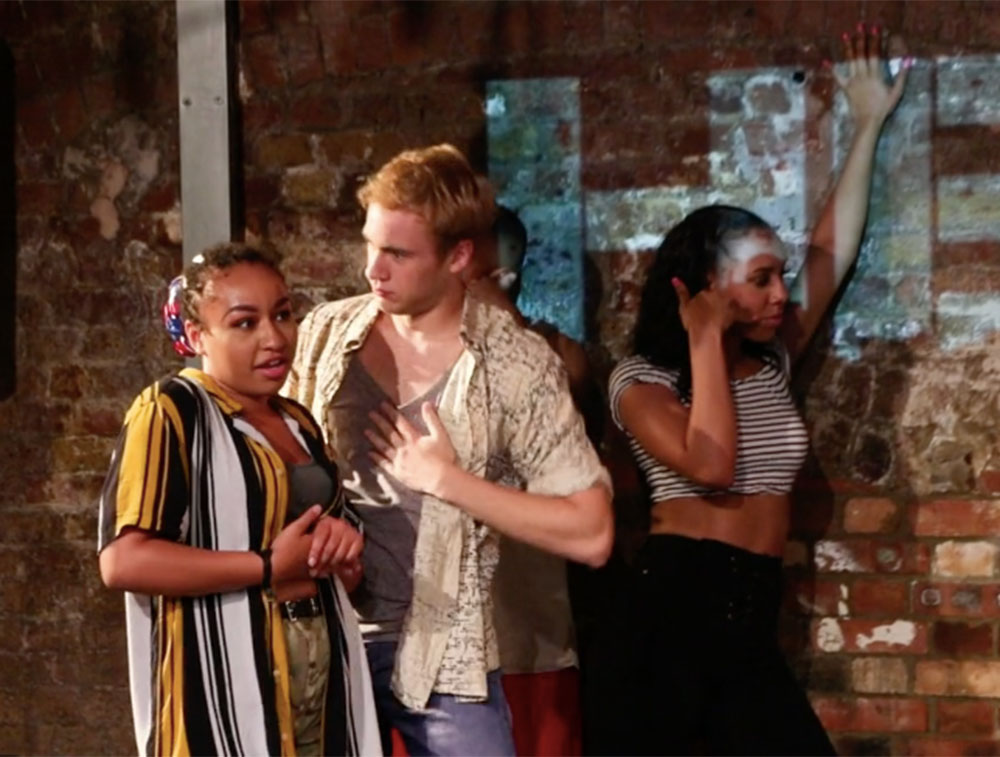 In the Heights is a high-energy musical adaptation by Lin Manuel Miranda based on the book by Quiara Alegría Hudes. It takes place in Washington Heights, a Hispanic-American neighbourhood of Manhattan where each character has their own problems and concerns about their purpose in life as well as how they will achieve the American Dream when the odds are against them.

[pullquote]“It was amazing. And all the more so when thinking that it was put together in just over 4 weeks. A massive credit to all involved and I’m sure many of the students will go on to great things!”
Andrew Shaw [Vice Chair of Wac Arts board][/pullquote]

Wac Arts performed In the Heights at the Platform Theatre in Finsbury Park and was a sell out show, the energy from the performance resonated around the building. With an audience of 80 people, the venue was intimate enough so that every person in the audience felt involved in the performance. The exposed brick walls and colourful, vibrant hanging decorations gave the set an urban, carnival feel. Directed by Ché Walker, the company hit the nail on the head with outstanding emotion and rhythm. With relatable themes, such as fear of failure/disappointing family, never being enough for your significant other’s family, trying to find your identity in a changing environment, and the death of a loved one, every person in the audience could find themselves in a character on stage at some point in their life. The company acted with such real and authentic emotion that you did not even want to blink in fear of missing a facial expression. With such a captivating company, the hour and a half first act felt like ten minutes. It would not be true Wac Arts show without a twist as they decided to cast Usnavi, the main character, as a woman to include a LGBT aspect appropriately timed as pride month just ended in June and London’s Pride Parade was the same weekend as the performances.

Ingrid Mackinnion’s choreography was absolutely incredible as you could not take your eyes off the fun and smooth street dancers. In such a hot room, the cast was noticeably feeling the heat, but continued to keep the energy up and never looked like they were not having fun. The dancers made it look easy even though what they were doing was quite the opposite. They made the dancer in everyone want to get up and move. With surprise flips and jumps, it felt like the true city Washington Heights with twists and turns at every corner, we did not know what was coming next!

The musical aspect of the performance was impeccable as well with Phil Cornwell, who was the Musical Director in the West End run of In the Heights. The music was upbeat and never ceasing as the band kept the audience tapping their feet and nodding their heads to the hip-hop, Latino beats. The students were especially excited to receive good luck notes before the show from the original West End cast, courtesy of Phil.

[pullquote]“Great representation of bilingual families and lgbt relationships. The choreography was fantastic, music was perfectly done. High energy the whole time.”
Participant from the LGBT+ Singing and Songwriting project[/pullquote]

Wac Arts’ performance of In the Heights pulled the audience through all the emotions of a tight community doing what they can for each other. You were frustrated, sad, happy, surprised, excited, and disappointed all within the span of two hours. You could feel the pain and confusion of a neighbourhood fighting to provide for their families in a government system that seemed to have forgotten them. The common theme of feeling powerless and not in control can be related to every cast member as well as every audience member. The struggle of trying to better yourself without abandoning your community can be found in the cast playing their roles, but also in the Wac Arts organisation as a whole. Surrounding yourself with people, who care and remain loyal to you, no matter what happens, is something everyone can find at Wac Arts and was accurately shown through In the Heights.

previousEvents that took place in Hampstead Town Hall
nextFranco and his support and collaboration with Hitler: The side the exhibition did show