Alum and Tutor Lati Saka Shares her Past, Present, and Future with Wac Arts 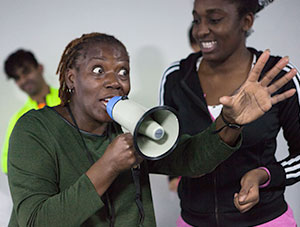 [pullquote]“You’d have thought it’s the performance stuff but it’s not… it’s the sense of family. It’s going back to the—I know we’re in the new building—but for me, it all started in the old Green Room. The old Green Room in Kentish Town, where at lunchtime there would be food being served but there’d be people stretching or dancing! There was just a real buzz all the time.”
Lati Saka tells us about her start with Wac Arts and shares her favourite memory.[/pullquote] 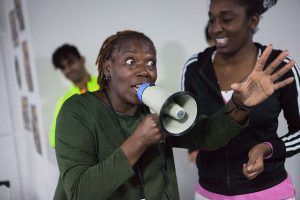 We sat down with Lati, one of our original students and current tutor, to talk about her experiences at Wac Arts and what she envisions for the organisation’s future.

Lati’s time at Wac Arts began with her friend and schoolmate Elaine Grant. They had attended primary and secondary school together, when Elaine told Lati about Wac Arts. Lati was running late on her first day, but when she finally found it, she tells us “I thought ‘Wow, this is an amazing place.’ I just felt so welcome, you know, and I actually remember Celia Greenwood there saying ‘Oh, it’s alright, come on in, welcome.’ She showed us into the old Green Room which was a hive of just people buzzing with life.”

Wac Arts became a home for Lati, as it provided a different sort of school. Performing in school plays was always one place where she felt comfortable. Prior to starting at Wac Arts, she had experience performing at school as well as with youth groups. However, it was at Wac Arts where she branched out from acting and drama into dance and movement.

Lati said, “It really was a place where I was truly invited, allowed to be as free as I wanted to be and I knew that I could always express myself through movement.”

Barriers ceased to exist within the walls of Wac Arts, as co-founders Celia Greenwood and Teresa Noble spread their vision to step out of the world where demographics prevented people from performing and sharing their talents. They understood that this was such an issue and were ahead of their time in creating spaces for all people to be educated in the arts.

After one year at Wac Arts, Lati was a founding member of Fusion, a youth company made up of dancers, actors, musicians and stunt artists. Fusion was unlike any other touring company, as it featured a diverse group of performers from different ethnic and economic backgrounds. Across the country on tour, Fusion was met by positive feedback—which empowered Lati and the others because it didn’t matter what colour your skin is. 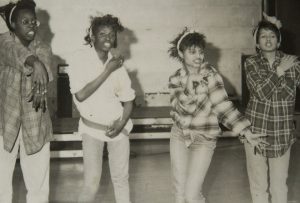 Yet, after years of performing, it became a very insular world. Lati tells us she reached a point where she “really got trapped in a low moment and I was at a point of giving up on everything.” The turning point for her was becoming involved in the Disability & Inclusion programmes at Wac Arts.

After one weekend helping out at a session, she realised “who you to have any feelings of negativity when there are these young people…who are so able, and so positive!” Now, Lati has been working with the Disability & Inclusion team since 2003, doing residentials and regular evening programming. After working with residentials, Lati was asked to cover for a tutor in the Over 18s programme.

“I fell in love right there and then,” said Lati.

The young people asked Lati to stay and she’s been there since. Her time with the Over 18s programme began with doing workshops and trying new methods, but the young people desired an element of performance. Once the students had the opportunity to be on stage, they blew everyone away. The next project for the programme is more collaborative; it’s all about developing leadership skills, technical skills, and empowering the people.

Lati has lived a very rich performance life, and it’s about to get richer.

While still teaching and empowering young people, Lati has taken steps to get back into her own performing work. She has begun her first performance project in five years.

“The thing is because I’ve met these wonderful people, there’s three people who’ve really touched me,” said Lati before mentioning three of her students—Nayan, Kidus and Stefano—who she is planning to collaborate with on her new project. This is a platform that both elevates her own work, as the main performer, and the work of her students, as a movement person, musician, and writer. It’s the young people who are Lati’s inspiration and are helping to bring the project forward.

In order to keep improving, Lati says Wac Arts needs more young people coming to Wac Arts with the community all around us, all being empowered through the arts to keep it real!