Wac Arts’ home has been (since 2000) the Old Town Hall in Belsize Park. As custodians of the building Wac Arts is responsible for the maintenance and management of the building and grounds. Wac Arts shares its home with other organisations who make the building an exciting creative and cultural hub such as Wac Arts College, University of the 3rd Age, Akademi South Asian Dance, Kids, London Gay Men’s Choir, AR Architecture and many others who create an intergenerational community – all committed to Wac Art’s values, vision and mission. 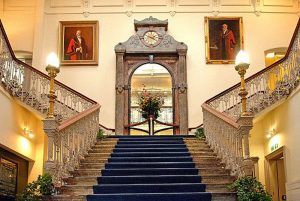 An impressive example of a Victorian vestry hall, designed in the Italianate style (with a campanile tower) by H.E. Kendall and Frederick Mew, Hampstead Old Town Hall was hailed as ‘a decided ornament to that part of Haverstock Hill’ (Ham and High) when it opened in 1878.

The building’s exterior has a symmetrical façade, flanked by sash windows, of Bracknell red brick with Portland stone dressings and Broomhall Company tiles. Many other original Victorian details can be seen inside, like the imposing ‘Imperial Staircase’, with its elaborate cast-iron balusters, which overlooks a colourful floor of Victorian tiling. Original cornicing, fireplaces and clocks can be seen; and the building houses three war memorials (to the Boer War, The First World War and to the Second World War). The Hall’s first function was to host the Cambridge Local Examination for Women, and the first full Vestry meeting – the vestry, or ‘parish’ councils predated London’s borough councils – took place on the 4th July that year. 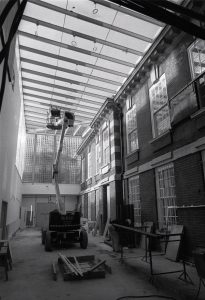 The Town Hall building during refurbishment in 2000

The early twentieth century saw an increase in the responsibilities of local government, and with the establishment of the London Borough of Hampstead, the Vestry Hall became a Town Hall. To support its increased functions, architect John Murray designed a substantial two-storey Edwardian extension in 1910, built the following year on the Belsize Avenue side of the building. Reflecting the Victorian structure, the extension was built in red brick with stone dressings, but its shape favours the Baroque revival style, popular at that time for public buildings. This part of The Old Town Hall remains in use as offices to this day.

In the 1960s Hampstead became amalgamated into the London Borough of Camden, and while the Old Town Hall continued to fulfil certain civic duties (not least as Hampstead’s Registry Office) by the 1990s it had fallen into disuse and disrepair. In 1994 it was listed as Grade II, and an energetic campaign to save it, run by the Friends of Hampstead Old Town Hall, resulted in the building being converted into an arts centre. An atrium arts block extension, designed by architects Burrell, Foley & Fischer, opened in 2000. This light-filled, mixed-use structure makes extensive use of glass and concrete, and was built on the site of two 1940s air raid shelters.

The grounds of the building hold several more surviving air raid shelters, including one that may be visited, in which original wartime graffiti can be seen, drawn on the walls by locals taking shelter there during the Blitz.

Find out more about our upcoming plans and the Inside Out Wac Arts (IOWA) project.