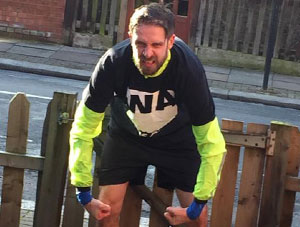 There are now less than 40 days until the London Landmarks Half Marathon 2019! We’ve been catching up with our runners as they continue their training and fundraising ahead of the big day – here’s what one of our previous employees Andrew Brandon said about why he’s taking part in the Half Marathon.

What is your relationship with Wac Arts?

I used to work for Wac Arts in the Building Services team. I met my amazing girlfriend there. It’s a really special charity to me as I’ve seen first hand how they change young people’s lives. It’s an honour being able to raise money for them.

What does Wac Arts mean to you?

I’ve always been involved in the arts, whether that is through music, drama or dance. I was lucky enough to go to a school and sixth form that offered all these opportunities. Now I know not everyone is as lucky as that and I feel Wac Arts not only gives young people that platform to express themselves and to move forward into the arts industry, but it is a place that always strives for excellence. To do the best that they can to empower the young and develop fearless and motivated characters who go on to create amazing work as amazing performers.

Have you ever taken part in a Half Marathon before?

No, this is my first long distance run I’ve done since cross county at school (which I hated!) However I’m kind of enjoying it, which I never thought I’d say. My friend ran the Oslo Half Marathon in a super quick time, so it’s giving me that competitive motivation to beat that time and be better than him.

What will be the first thing you want to do when you finish the race?

Find out my time. Maybe have a pint afterwards as I’d be three months sober by the end of the race.

What made you take part in the London Landmarks Half Marathon?

Funny story actually, I’d always say that I could run a Half Marathon when it came up in conversation. Acting all big!! Then Hayley (my girlfriend) got sick of hearing it, so signed me up and told me to put my money where my mouth was. At first I was a bit annoyed as she’d called my bluff but now I’m really looking forward to it. Just a shame that she is too scared to do it with me! 😉

What is your training schedule?

I cycle to work and back 4 days a week, which is 14.2 miles per day; Monday, Tuesday, Wednesday and Friday. That keeps my basic fitness up. Thursday before work I’ll either do a 5km or 10km around Tooting Bec Common (depending on what time I get up). Last week I ran to work which I intend to start doing more now we’re in February.

Saturday is my long distance run. At the moment I’m running 10 miles in 1 hour 29 minutes and I managed a full Half Marathon distance in about 1.50 the other day! This isn’t too bad. Now I need to really start to chipping away at that time and get it to 1hr 28 mins to beat my mate.

Sunday is my well deserved rest day, where I become one with the sofa.

The event is described as “not your average half marathon! From cultural landmarks and heritage to the city’s quirky and hidden secrets, runners will get to explore the capital on a route like no other!” What excites you about taking part in the London Landmarks Half Marathon?

You know what, I honestly haven’t thought about the route at all until you asked that question. My head has been so into just getting my fitness to a decent level. I have always loved walking over the bridges in London and looking down the Thames though so I am sure it will be beautiful.

What time are you hoping to complete the race in?

So I started off saying I’d be happy with anything less than two hours. However as my friend did the Oslo Half Marathon in 1 hour 29 minutes (stupidly quick for a guy with a dodgy knee) I feel like I want to try and hit that. But I think I’ve got to be honest with myself. It’s my first Half Marathon so I’d be happy with 1 hour 45 minutes.

How much are you hoping to raise?

Wow, that’s a hard one! It’s probably a bit obscure but I love running to Thee Oh Sees ‘The Dream’. It’s 6 and half minutes long and its proper driving. That needs to be on for the last kilometre to get that time.

Last but not least, do you have a 40th Birthday message for Wac Arts?

You can sponsor Andrew (and help him reach his £1000 target!) by heading over to his JustGiving page. Huge thank you to Andrew for taking part in the race (and to our Head of Marketing and Communications Hayley for volunteering him).