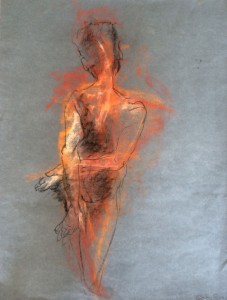 This residency launches with an exhibition of Gaby Guz’s unique pots and life drawings at the Old Town Hall in Hampstead, starting with a Private View on September 10th and continuing until early November. A percentage of proceeds from the exhibition go to Wac Arts to help fund their empowering programmes for young people.

Gaby is a thrower and favours an intricate and highly technical style of pottery called ‘naked raku’ which is produced as follows: After the pot is thrown and turned, up to eight layers of very fine liquid clay (terra sigillata) are applied to the surface of the pot and burnished in turn. The pot is then fired in a kiln for the first time. A layer of ‘resist slip’ is then applied to the pot and the pot is given a raku glaze which is characterised by its cracked appearance.
This second firing is then carried out and when the kiln reaches around 1000 degrees, the pot is removed with tongs to be placed in a metal bin where sawdust is then thrown on top of it. The sawdust penetrates the glaze where it crazes and this creates the random black markings that characterise a raku firing. At this point, with the ‘ naked raku ‘ method, the glaze either ‘pings’ off or more commonly, is removed when the pot is cool.
Gaby says, “As many pots fail as succeed, but for each firing there is a renewed sense of anticipation and excitement.”

Speaking about her life drawings, Gaby says, “My principal aims are to portray the light, tonal differences and movement of a pose. Consequently, I favour shorter poses in which the model can hold more difficult and dynamic positions and where the time to capture the essence of the pose is deliberately limited. This creates pressure but I enjoy the challenge of not having time to think, but just to ‘feel ‘ and express what is in front of me.”

Gaby uses soft chalk pastels and gently textured paper such as Ingres. Her first response to the light and form of her model is captured in colour, and the line applied afterwards. This way the tone often ‘escapes’ the line and equally the line is not ‘trapped’ by the tone, which gives a sense of movement.

“BARE”, the exhibition, includes a selection of Gaby’s best work from over a decade of ceramics and drawings.

Hayley Butler (Artist In Residence Manager at Wac Arts) said “We are delighted to have Gabrielle as our artist-in-residence supporting our vital work with young people, with this exciting and unusual exhibition. The combination of her dramatic raku pottery and her distinctive drawings of models in often dramatic poses, is sure to interest a wide variety of North London art lovers.” 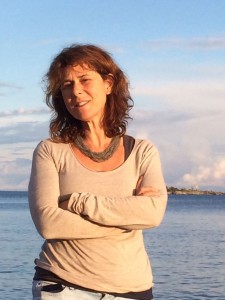 Gaby first discovered her love of ceramics whilst a teenager at school in London. Drawing came a few years later, when she enrolled at life drawing classes at The Ruskin School of Art, while studying for her undergraduate degree in Experimental Psychology at St John’s College, Oxford. Having felt, throughout her childhood and teenage years, that she was more of a “maker“, a 3-D person creatively, and somewhat fearful of drawing, the Ruskin introduced her to the joy and liberation of drawing from life using charcoal.

After two years working as an Academic Researcher in child psychology, Gaby left Oxford and returned to London, where she worked in Advertising as an Account Planner. After 5 years, however, she felt the creative itch again and left her job to train in ceramics, firstly at Camden School of Art and then at Harrow School of Art in the early 1990’s. She was particularly inspired by the pottery of Lucie Rie and Hans Coper, and her passion was throwing at the wheel.

Gaby continued to make pots at Kingsway College in Kentish Town with a wonderful and supportive community of potters. She soon came to favour a style of pottery called “naked raku.”

After 15 years of throwing, turning and firing pots at the Holmes Road centre in Kentish Town, the facilities were sadly closed and the creative community dispersed. As a result, and initially only “as a stop gap”, Gaby decided to attend life-drawing classes at Hampstead School of Art.

This “stop gap” has so far lasted 6 years and her passion for life drawing continues to grow. Her introduction to earth-coloured, soft chalk pastels opened up a whole new world to her beyond that of the black ,white and greys of using charcoal alone, and abolished her fear of using colour.

Gaby lives in London with her husband, three children and her adorable dog, Poppy, who aspires to being a life drawing model herself but has so far been neglected in favour of human subjects. 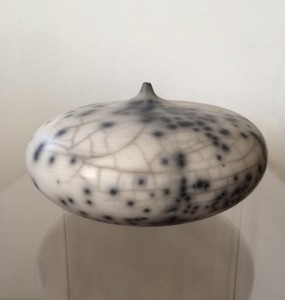 “After years of struggling with seeing myself as an artist, when also a scientist, I have come to understand that this division is artificial and misguided, and starts with unhelpful and restrictive “labelling” at school. I firmly believe that learning to make and create is as important as learning to read and write and that many people are both artistic and scientific, indeed flourish by being so.

BARE brings together my nude models and my ‘naked’ pots –naked in the sense of the outer layer of glaze being removed – for the first time.

Whilst my concern in my drawings is to communicate light, tone and movement, when it comes to my pots, my obsessions are form and finish. The way a pot feels is as important to me as the way it looks and I often check its smoothness by rubbing it against my cheek as my hands have become somewhat weathered by the water, clay and chalk pastels that are the tools of my trade! Similarly, the aesthetics of what sort of neck, rim or opening the vessel should have, has always fascinated me. What is it that makes one form perfect and another slightly wrong?

I like the contrast of the classic, restrained, controlled form of my pots with the wild, untamed surface decoration, which is largely uncontrollable: the end result is up to the alchemy of the kiln. After all the precise and painstaking work of throwing, turning, applying and burnishing, you have no idea what is going to come out of “the bin”. That creates huge excitement and inevitably a lot of disappointment as well. The “naked raku”method has a huge failure rate but fortunately enough successes to keep me addicted!

Making pots and drawings are both very physical activities for me and both require intense concentration. My whole body is involved in these activities, which may sound quite surprising. I am in the moment and when it is going well I cannot think about all the other things that crowd into my mind the rest of the time. I am exhausted but also exhilarated after a 3-hour drawing session or a day spent potting.”

For further information please go to the artist website www.gabyguzart.com