Che was Wac Arts first official artist in residence and we are sure he will be back sometime soon to create his next master piece. Che created and rehearsed his Offie nominated show” Klooks Last Stand” in the Council Chamber at Wac Arts even using Wac Arts graduates as his cast… 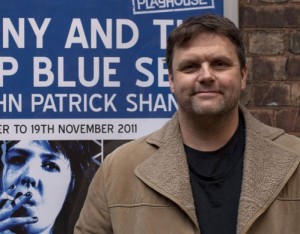 Che Walker is an extremely engaged alumni that has always stayed part of the Wac Arts family by teaching, being an artist in residence and holding regular fundraising nights for Wac Arts. Che has also had a successful career as an actor, playwright and director. His studies in acting began at the Webber Douglas Academy in London and later came to study at Wac Arts (Previously known as WAC). His first play, Been So Long, was premiered at the Royal Court Theatre in 1998 and after nominated for two awards it was not long until the play was translated and performed in Sweden, Denmark, Germany, New Zealand and Australia. Che’s career took off with his with no hesitations.

Che continues to give back by teaching acting at RADA and the Arts Project for Socially Excluded Youth and has been Head of Acting at Wac Arts for over ten years. He has even taught writing at the Royal Court Youth Writers’ Programme, Centre Point Homeless Shelter, Hampstead Theatre Youth Project and the Feltham Youth Offenders’ Institute.

Che’s most recent play he wrote and directed whilst being an artist in residence at Wac Arts was ‘Klook’s Last Stand’. It has had raving reviews, one claiming his work to have an amazing connection between the characters and the written play. He called his play a rarity stating Che’s directing brought his characters to speak with energy and a sense of rapping, combined with music. An interviewer claimed Che to have no limit on himself as to how far he can go.

Che is an activist when it comes down to protecting the British Arts. He believes that if it is not supported that it will soon be ‘inaccessible’ to most of the public. He believes that art has a huge effect on the growth of children’s social development. Wac Arts supports this statement. Children get to explore and learn how to express themselves in other forms. They begin to learn how to develop their own views and opinions. With Che’s contribution Wac Arts has been able to support amazingly gifted students to further develop their individuality.

Che does not understand how people can’t see that children struggle and how schools can at times make them vulnerable to bad influences. He states that the experience they get at Wac Arts, finding their voice, helps them find a reason. It allows the student to be empowered and awakes their inner life. They begin to form a family here at Wac Arts and Che is part of that family. He believes that Wac Arts gives students a root to skills. He sees the importance that Wac Arts brings to those students who come from underprivileged homes and areas, where they struggle with daily life, Wac Arts is a place for them to be free and comfortable and only then their artistic selves can develop.

“Art did not flourish during the dark ages but during the golden ages and here we try to make that age possible, for students to flourish and create” Che Walker