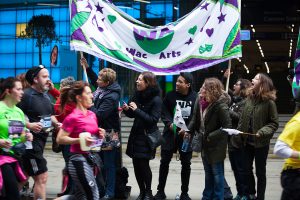 On Sunday 25th March, 9277 runners crossed the starting line of the inaugural London Landmarks Half Marathon at Pall Mall, raising over £1million for charity. This new Half Marathon, organised by baby charity, Tommy’s, is the first London Half Marathon centered around taking in the City and all the capital’s landmarks. The route took runners around London, past iconic landmarks such as Nelson’s Column, the London Eye and Big Ben. Seven of those runners represented Wac Arts, raising over £6300 and smashing their goal of £5000. This donation will go towards subsidising our programmes, keeping them accessible to all young people.

Our running team included a staff member, a parent, a trustee, a tutor, an ex-staff member and two long-term supporters of our work. Together they ran just under 92 miles – the equivalent of running from our home at the Hampstead Old Town Hall to Birmingham!

In the run up to the event, the running team had opportunities to train together at our January Jog and February Fun Run events, where they braved cold weather and the threat of snow to make sure they were prepared for the big day! As well as giving up their time to train and run the race, they worked hard to secure sponsorship from their friends, family and colleagues – We cannot thank them enough for the time they have put into supporting us. 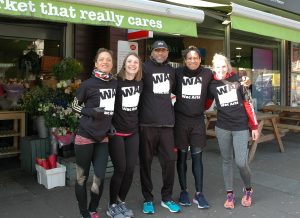 Those not running were still able to show their support, taking part in our make station, run as part of our Wac Arts Weekender, Beyond Time. They made flags and banners that we then waved at our cheer station outside Cannon Street station. Staff, supporters and some of our young people all gave up their Sunday morning to join us at the cheer station in supporting both our own runners and the thousands of others that were running at the event. Other roadside entertainment included cheer stations from Tommy’s, Mind and the NSPCC, and performances from our building partners, the London Gay Men’s Chorus.

The London Landmarks Half Marathon was a fantastic day for all involved, and an excellent celebration of what charities, like Wac Arts, achieve across the capital. We cannot wait to get involved again next year. We’d like to send huge thanks to our runners, our donators and the Tommy’s and London Landmark Half Marathon team for inviting us to join the event.

You can still make a donation to congratulate our wonderful running team. Just visit http://bit.ly/GivetoWALLHMTeam. Your donation will support the work we do here, supporting young people through the arts.

Find out more about the London Landmarks Half Marathon and pre-register for your place for the 2019 race by visiting www.llhm.co.uk.