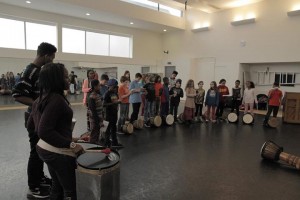 Wac Arts Interactive embarked on an innovative and exciting inclusive technology project over this half-term. Building upon the skills the group had already began developing in their previous Mac 7 Mira iPad Interface Design project, young people worked to create their own inclusive music apps, designing every aspect from the function and sounds right through to the buttons and overall aesthetic. These accessible music apps are bespokely made and can be adapted and individualised by different users – holding great potential to be used in a wide variety of future disability projects… watch this space! To demonstrate just one of the ways this new technology can be used, the project culminated in a live music video performance. The Interactive group used the apps and Arduino kits (an open-source electronics platform using circuits and fruit!) to trigger sounds, music and visuals, including sounds sampled from Junior Wac Arts Music in Motion half-term project. A truly innovative, collaborative and interactive spectacle! 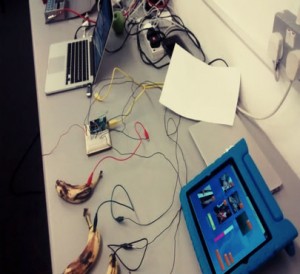 Some of our exceptional young people had their achievements recognised at the Annual Camden Youth Awards this past week! The awards celebrated overcoming obstacles in order to achieve success in school as well as volunteering in the community and charity work. Camden Youth received over 50 nominations this year. Nominees were judged by a panel of their peers. Congratulations to Zakaria Osman and Francesca Cutri on their incredible youth work!

Music in Motion was the Junior Wac Arts half term project. The students participated in song writing, singing, video producing and a drumming workshop as part of the week long project. The students shared their work with friends and family on Friday afternoon and it was great fun! The whole group performed a song that they wrote together called “Anything is Possible” as well as displaying their new drumming skills, performing a ensemble piece all taking a turn to perform a drumming solo and show of their new skills to the crowd!