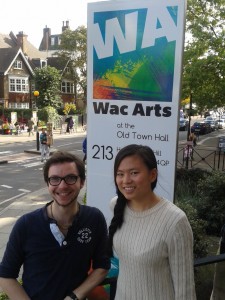 Elizabeth Frickey and Jordan Nicholls joined Wac Arts on an 8 week internship. Elizabeth is a EUSA student from Boston, USA so this internship is not only in a new work experience for her but is also in a new country! Jordan is a 3rd year student from Royal Central School of Speech and Drama who is completing an Internship at Wac Arts as part of his enquiry project module.

“When I found out that I had been placed at Wac Arts for my internship, I was ecstatic. I didn’t know exactly what to expect. The one thing I did know was that Wac Arts would be an experience in which I could engage in performance arts, something I am quite passionate about, as well as apply the (little) knowledge I had in the field of psychology.

Before my interview, I was a little bit nervous; I did not know what to expect from the staff or the environment. Fortunately, I was greeted by two very nice women who seemed to know all of the ins and outs about Wac Arts and who were happy to answer any of the questions I had. Upon speaking to them, I learned that Wac Arts is not just a school, it is a community in which students can feel safe and at home. With this thought still fresh in my mind, I left the interview feeling inspired and excited to be a part of such a unique program.

Once I began working, I immediately felt at home. From what some of my friends had told me, much of their internships revolved around sitting at small desk for eight hours, or, worse, bringing tea and coffee to their bosses. However, this particular work environment was very inclusive and interactive. While some of my work did involve sitting at desk and doing administrative work, a number of the staff would express interest in what I was studying and engage in conversation with me. This made me feel like less of a stranger, since, on top of being a new intern, I was also an American living overseas for the first time, a situation that can sometimes make a person feel very self-conscious of the way she acts and speaks. I felt very lucky to, not only enjoy the work I was doing, but enjoy the people I was working with as well.

In addition to the welcoming staff members, my overseer, Hayley, made sure that I could also get involved in working with the students. While I expressed interest in all of the Wac Arts programs, I was most drawn toward the Disabilities Department, because one of my main interests in psychology was (and still is) mental and behavioural illnesses. The first program I worked with was Wonder Wac, which is a program for people in their early teens who have some type of disability. For my first experience with Wonder Wac, I was a little unsure about what to expect. Although I had been around individuals with disabilities, I had never really been in a situation where I was directly involved with working and interacting with them. Luckily, all of the students were very kind and very enthusiastic about the projects they were working on at the time. One student, Mohammed, seemed to really enjoy painting, and together, we worked on painting a library for the miniature city they were building. Another student, Aman had a lot of energy and broke out dancing during the middle of the exercises, which I found very entertaining. Overall, I was pleased to find that I was fairly comfortable with my surroundings, despite the fact that they were new and unfamiliar.

During my time here, I have found Wac Arts to be a very positive environment. It has become clear to me that the number one goal of the staff is to make sure that the students get everything they can out of their experience at Wac Arts. I know that there is sometimes a stigma against the term ‘alternative education,’ but I have found Wac Arts to be one of the most creative and stimulating institutions I have ever worked at. Regarding the students I have encountered, whether they are younger or older, with a disability or without, I have been inspired by their talent, motivation, and enthusiasm. Every time I come into the office, I learn something new about the organization, so I am excited to see what else is in store during my last few weeks here”

“I’m currently in the third year of my degree at The Royal Central School of Speech and Drama. The course is Drama, Applied Theatre and Education, meaning that we work with a varying number of groups in the community, from prisoners to multimillion pound corporations to work with the groups on issues they have. This term is based around a professional placement, working as though I am out in the real scary world.

Shamefully, I’d never even heard of Wac Arts until I was told where I would be placed. It’s never come up in my research or observations during uni, even though it is a five minute walk from there! After researching the charity and the work it does I can’t understand how I missed it. The amount of varied and complex work that Wac Arts takes part in is incredible, and seeing the photos and videos on their website made me feel incredibly excited to start.

This was only compounded when I first visited. Treating this like a job interview I came into the building feeling extremely nervous. However after a few minutes of meeting the staff, pupils and touring the building I was completely put at ease. It’s such a friendly and welcoming environment that seems to welcome anybody that wants to learn and challenge themselves using performing/ creative arts.

Currently I’m working in a number of departments, mainly in administration roles. This is a fantastic opportunity as I’ve never seen how an organisation like this is run, so to see the nerve centre on a daily basis is a non stop learning experience. That’s not to say its easy however. Everyday there are new challenges and new things I need to learn. One key point is how to juggle the many roles I now have. Most days I go from one role to another, like contacting companies for stock and supplies and organising discounts, straight into working with a group of Special Education Needs Children.

So far this is a fantastic learning experience, and It will be fascinating to look back on the work that I’ve done and, more importantly, what I have learned.