June’s Facebook star of the month is Frankie Cutri! 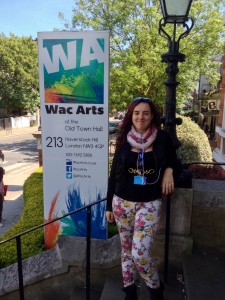 Frankie first came to Wac Arts as a student on the Creative Communications course that later became Wac Wonder Web. She is now a Senior Wac Arts student, focusing on singing and dancing, and due to her passion and dedication to Wac Arts she has also progressed to being a member of staff for Wonder Wac even now completing an NVQ in Health and Social Care!

Frankie has a diagnosis of Autism but has not let this diagnosis prevent her from moving forward with her hobbies, projects and now career! Frankie is a true inspiration to many of the students and staff at Wac Arts.

It is also Frankie’s Birthday week! So Happy Birthday Frankie and thank you for being a Wac Arts Star!!!

One of our former interns, Jordan Nicholls, had a chat with Frankie about her experiences at Wac Arts and her hopes for the future!

Interviewer: So Frankie, the first question is, how did you start coming to Wac Arts?

Frankie: That’s a really good question! I actually started coming to Wac Arts through my secondary school, which was quite an interesting school. One of your speech or language therapists came to my school and did loads of stuff with our young people.

Interviewer: And how did you end up coming to Wonder Wac?

Frankie: I was a student first and then I just progressed to a member of staff because I showed interest and I wanted to work here.

Interviewer: What sessions have you attended here?

Interviewer: How long have you been coming here for?

Interviewer: I know you went briefly into it, but what other kind of things were you doing as a Wonder Wac/Wonder Web student?

Frankie: Wow, that’s so fun because I get to think of all the trips we went on! We went to Zinc, we went to Alton Towers – that was so fun! There’s been so many. We did loads of radio shows, staff-involved, with Paul Chivers. Drumming with Zed, Talacre for people with disabilities.

Frankie: No, I don’t, I love it all so much! What I love is the staff team. I love them all. They know that I have a disability as well so it’s like they understand me which makes my job much easier than usual.

Interviewer: You go to Senior Wac Arts as well don’t you? What classes do you do there?

Interviewer: So what kind of things are you bringing from Wonder Wac into Senior Wac?

Frankie: I think losing my anxiety more or less because when I was a child I would always get nervous, like “I’m not qualified enough to work with them”. It’s actually training me to be confident in performing. I guess that’s what I bring from Wonder Wac to my Senior Wac is being able to perform because I get very nervous, my nerves are terrible. I’m not one of these people that you can just put on a stage and they’ll perform. I look at everyone and just crush. So I guess what Wonder Wac has taught me is performance. Because singing in front of the young people is a performance if you will.

Interviewer: Can you tell us a bit more about your involvement on the other side of Wonder Wac? You’ve told us about when you were a student; can you tell us about being a member of staff there?

Frankie: Being a staff member on Wonder Wac has given me so many skills like how to be calm and how to perform and how to be with the young people. It’s been inspiring me and helping me reach my potential because these young people may not be perceived to be as bright as most but believe me they are very mentally open. I love that about my job because not only are we teaching them but they are teachers, they teach you so much. For me I’m just flattered that I was accepted to be in this job. I’m very lucky.

Interviewer: What made you want to go from being a student to being a staff member? What was that process like?

Frankie: That was hard because I didn’t know how to go about it or how to go about going for any job. I didn’t know what to do. It was quite difficult. My sister spoke to me, she was really the push there, and my mum and my family spoke to me because they wanted me to earn money for myself. Also I share my money, I help my mum out which is quite nice because it’s gives me a confidence booster. I can actually give my mum money now, I don’t need to ask her for it! What actually made me think about working here the most was my dream, not just singing, of being a role model for other young people who have what I have because they have probably been through very difficult times and not had someone to look up to, to tell them it’s okay to be who you are. When I was growing up I never had that, I never had somebody to look up to who would say it’s okay to be who I am. No-one ever said that to me, not even in school, except my mum, my sister and my brother. Apart from that I had no-one else I could go to for guidance. So I thought “Why don’t I take that role?” because there are going to be younger generations who will be diagnosed with what I’ve got and they will need somebody to look up to. So I thought this would be a good opportunity for me.

Interviewer: You’re using your skills that you’ve gained in those sessions to help work with other people and then hopefully keep that cycle going.

Frankie: Yes and also using it to write a book.

Interviewer: What sort of book?

Frankie: A biography. I need somewhere to put my anger. It has all of my childhood. It’s more of a memorial book because I’m putting in all my memories as a kid up until where I am now. I’ve put it on pause for the moment because I’ve been so busy.

Interviewer: I also understand that you’re working towards an NVQ? What’s that in?

Interviewer: Where do you want to go with that?

Frankie: The aim is to stay here and keep working with these young people. They’ve touched me in ways I can’t put into words and I don’t want them to be taken from me. The other day a young person asked after me. I had been in to pick up something up that I’d forgotten and I ended up staying to help set up the room, get the kids in and settled but then I went home. And then a kid asked after me! I was in so much shock because that’s one person and they have loads of people there. For that one young person to remember me made me cry. It was so sweet.

Interviewer: You like the fact that you can have a positive impact.

Frankie: Yes. But they have an impact on me too. It’s like a cycle. When I’m with these young people it’s just constant love. I love them to bits.

Interviewer: What would your dream job be?

Frankie: Ideally it’s to be a singer because I love singing. But my dream job is to become a singer so that when young people with LDD see me doing it they think “She’s autistic, she can do it so we can too”. I want to build that kind of mentality in day to day life in people with LDD. I made up a little catchphrase – “Autism is not a force it’s a law and if you undermine us we’ll show you what it means to be part of the universe”. It’s just something I have in my head, I don’t know why! But, anyone with LDD, if they see me be successful in whatever I want to be successful in that will give them a confidence booster. That’s the reason I took this job and the reason that I do everything I do; it’s not only for me, it’s for them. They need that. Young people are the future. And not only young people with LDD, any young person can see me be successful and get a confidence booster. They’ll say “Well if she can do it with all the problems she has then we can do it too”. It’s about building that strong mentality with young people. People always want to feel empowered. A lot of these young people have gone to school and been trashed and told they’re stupid. Who are we to say that to any person?

Interviewer: What are three things that you have benefitted from by being here?

Interviewer: And how has Wac Arts helped with those things?

Frankie: Being tidy through setting up the room, making sure that it’s appropriately set up with nothing on the floor. Time management – always looking at the clock, working out how much time I’ve got. Mel and I were going through this. Washing dishes because I wash cups here.

Interviewer: If you could sum up Wac Arts in one word, what would it be?

previousHappy Birthday Wac Arts Backers!
nextAre you stuck for something to do this summer?