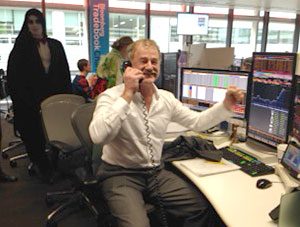 On the 4th of November Wac Arts was one of the 18 charities that participated in the fourth version of the Bloomberg Tradebook Charity Day.

Celebrity ambassadors joined employees at Bloomberg’s agency brokerage business on their trading desks in New York, London, Hong Kong and Sao Paulo to take client calls as they raise money for participating charities from around the world.

Wac Arts supporter, Owen Teale was our celebrity ambassador for the day and was in charge of raising commissions for Wac Arts. Owen was extremely proud to support Wac Arts, he spoke eloquently about the organisation to the trading floor staff stating that “Wac Arts was in his heart” and gave fans exactly what they wanted – talking Game of Thrones battle strategy on the phones to traders and getting into character for GOT inspired photos for the photographers! Owen not only got on the phones, signed autographs and posed for photos; he also gave an interview to The TES and spoke to the BBC about his chosen charity and his day as a trader.

Last week the TES published the story just as the new series of Game of Thrones hit our screens and Owen, who plays Alliser Thorne has a leading role! Read the interview below or download the My Best Teacher article here.

The long-awaited sixth series of Game of Thrones is finally underway. Owen Teale, who plays Ser Alliser Thorne, remembers a teacher in South Wales who opened his eyes to the world of acting.

A primary school teacher introduced me to theatre; that was really her love and so she was sharing her love, which is an admirable thing in a teacher. it was from an English teacher in secondary school that I learnt about rigour and applying myself. But the teacher who must go down as the person who changed my life was ES Davis. Ewan was his first name, i’m pretty sure.

Mr Davis was there for me at a critical time in my life. i had been suspended from Cynffig Comprehensive School, in Bridgend, South Wales, for organising parties and bringing alcohol into the school. i was an a-level student, doing maths, physics and chemistry – subjects i didn’t care about. i always had an interest in the arts, but had never been given an opportunity to pursue it as it was deemed too risky and, if you had some talent in science, it was seen as negligent to throw it away.

Mr Davis was deputy head at Cynffig. I remember being called into his office and him saying, “i am going to try to understand you, rather than focus on the problem.” Before the end of our meeting, he told me that he had some friends who were determined to transform a fairground in Barry island [Wales], into a theme park. He soon introduced me to John Wardley, the man behind huge fairground rides in alton Towers. i got a job with this man, who was very much an entertainer and a showman. The job gave me a chance to dress up as Barry the bear and meet people. That was during the Easter holidays of 1979, the second year of my a levels, which i never sat. instead, i applied to drama school and the following year went to Guildford School of acting.

I first met Mr Davis at my school, which was in a problem area, with lots of housing estates. The first half of my childhood was spent living on a council estate and then, for the second half, i lived in a house built by my dad, who was a clerk. Nobody around me had any experience of acting as a profession, only a sense of famous people and stars. i’m now involved in Wac arts, an organisation that provides engaging performing arts programmes for young people who often come from challenging backgrounds themselves.

Mr Davis taught me latin for two years from when i was 14. He was flamboyant and enthusiastic in his teaching style and used to say to his class: “let’s go and sit on the grass.” if you drifted off during the lesson and looked at nature, that would have been worthwhile in his books.

He wasn’t like any other teacher in the school. They were much more regular. if you were good at rugby and represented the school, then you were very popular with the other teachers because you brought honour to the school and that meant more than anything to them. But Mr Davis didn’t care about that. He was original. in fact, he was a bit of a joke figure to the students because he wasn’t as harsh as the other teachers. We even had a nickname for him – “Snooks” – because he looked like he had snooker balls rustling around inside his cheeks and his head was shaped a bit like a snooker ball. But Mr Davis opened a door for me, a door i wanted to go through. Without him i don’t think i would have become an actor. What he did was above and beyond the call of duty. He didn’t see me as a bad person, but someone who had lost his way.

In 1984, after i made my television debut in The Mimosa Boys, a film about the Falklands War, Mr Davis wrote me a very short letter, which was full of joy. He wrote that he was “absolutely thrilled” to see me on TV and “guilty of a little pride”.

Owen Teale was speaking to Adeline Iziren. He is an ambassador for Wac Arts, a place where young people from diverse backgrounds are nurtured through high-quality arts education. Owen was one of many celebrity ambassadors who hit trading desks to raise money for their chosen charities, at the main London office of Bloomberg, the global financial data and media company. The event took place on Wednesday 4 November 2015.