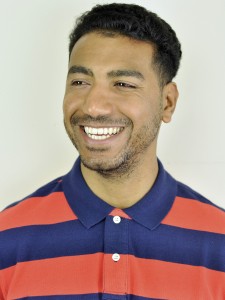 Return of the Jedi

Similar to Luke Skywalker’s return to Dagobah, Yasen Atour has returned to Wac Arts. An alumnus of Wac Arts, Yasen was mentored by Che Walker, Steve Medlin and Celia Greenwood in the late 90s and went on to build a successful career in film, including the creation of his own production company, Palikuku Films. Yasen was at Wac Arts to develop an upcoming film project with two of his colleagues when he warmly invited us in to interview him about his relationship with Wac Arts and the Yoda-like qualities of Celia Greenwood.

How did you get to Wac Arts?

I did a short course at Hammersmith College and that was in ’97 I think it was, ’97 or ’98. And I loved the course, I absolutely loved it and I knew it was something that I really wanted to do, you know, to act and to create my own work. And there was a lady there called Mitsy Richards and she said to me, she came up to me as the course finished and she said ‘Look, yes, you look like you really, you really enjoy what you’re doing.” She said “You’re at an age where you should take the bull by the horns”.

Coming in here and I met Celia and she, a little Yoda came out with her pouch on the side and what looked like a Light Saber, she looked at me and she was like “You’re gonna go and you’re gonna work in Che’s class”, Che Walker, and really the rest was history, it really was.

Why I love Celia so much, she’s the most straight arrow you’re ever going to get. That was good, that was good, but I go to Celia for her to be like (clicks fingers) “What are you doing?” My audition for the Shakespeare the first thing she said was “You’re not getting in to any drama school. Forget about it. If you can’t speak, forget about it.” And I knew what she meant, she said my diction, the way I was pronouncing words.

Interviewer: As an artist, what skills did you learn?

Oh here we learned physical theatre with Steve Medlin, we did voice with Rachel, we did Shakespeare with Che, how to look at scripts, how to break down scripts and characters and I was even on some music courses and stuff that I thought I would never be interested in and all those things they’ve helped me throughout. I hated Shakespeare but I understand Shakespeare because of Wac. I understand it and I understand what it requires. You tell me where you can go to learn Shakespeare.

That was the worst place to learn Shakespeare, that’s why I was like “What? Shakespeare? What is this language? What? Why are we learning this language? We might as well be learning French or German.” They teach one way whereas here it was an individual thing. You know, it was, if you don’t understand it through the language let’s make it physical. Let’s do it this way, let’s make it visual. So there’s different ways to teach everybody, there’s not one way, and that’s what I loved about Wac and that’s what I got from people like Che and Martha.

Often motivation to learn is about individual attention and opportunity

Interviewer: You were motivated to learn a lot of that from coming here or do you think that you would have done it anyway?

When I came here it motivated me to learn everything. Right? It was like a pound a day or a pound a class or whatever it was and they gave us so much.

Interviewer: How much of it was the nurturing motivation because you’ve obviously worked with Che Walker so you had a professional person backing you up.

Absolutely, Che Walker is my mentor.

Interviewer: Is the other side of it the nurturing, did you think that you maybe and other students, do you think that really brought it all together for you.

We were never broken down and rebuilt.

I came in here with one way of thinking. I came out of here a whole new human being.

But with my soul and my basic foundation still intact. Do you know what I mean? They didn’t knock me down and rebuild me, they worked on what was there already. My opinion is that you know you watch these shows and people went to these great drama schools and were taught by these great teachers and whatever but there’s no soul. And that’s because they get rid of it. When you come to Wac, they’re not trying to get rid of your soul; your soul is why they took you in the beginning. That’s why they accepted you.

What are you doing today at Wac Arts?

Interviewer: And what are you doing today?

Today I’m here with these fine gentlemen. These are my colleagues.

Moulded me? (Laughter) Don’t forget that we, we were finalists and runners-up at Reed Film Festival which was aired at BAFTA so we graduated from Arts Ed, first film we’d done we were there watching our film on a big screen. And that was one of the best moments for me personally because we created that.