Ex-student turned volunteer wraps things up at the BBC

Zak Osman started at Wac Arts as a Wonder Wac Arts and Senior Wac Arts student, after showing a keen interest in film editing and media he started interning with us here in the Wac Arts IT and Comms department. Zak was offered a placement on the Stephen Lawrence BBC Training Programme going up against many other applicants, Zak was able to prove his passion and interest for television and earn his place on the programme! 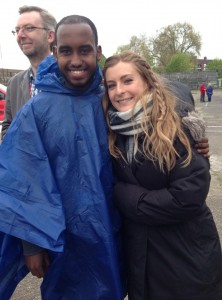 Zak is now in the 10th week of his BBC Traineeship. Since he started at the BBC he has had some amazing experiences and lots of fun! He sent us some photos including one taken during his work experience with the Eurovision Song Contest crew. He thought it was great to meet Molly Smitten-Downes who will be on the show representing Great Britain! HE also sent a list of what tasks he has been undertaking in the last 10 weeks:

Here are the list of things I have done:
1. I was with Eurovision Song Contest crew doing a 40 second shoot.
2. I was based at BBC Media Centre in White City working at the Entertainment and Events department.
3. I attended to the BBC Radio 1/1 Xtra focus group.
4. I have done a lot of training at various BBC buildings including Wood Norton and Elstree.
5. I have spent a few weeks at college as part of the training course.

Well Done Zak, we can not wait to see what you do next!