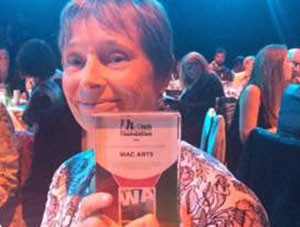 On the 1st October Wac Arts was awarded the h.Club Foundation Philanthropic Award. The award was presented by Neil Mendoza, chairman of the Landmark Trust and Celia Greenwood was described as an inspiration!

For the first time at this year’s h.club 100 awards, The Hospital Club introduced the philanthropic award to recognise a UK creative charity which has made an outstanding contribution to supporting youth employment and education projects in the creative industries. The award is proudly sponsored by The Hospital Club’s charity, The h. club Foundation and was judged by Amanda Berry OBE (CEO- BAFTA) Neil Mendoza (chairman of the Landmark Trust) and Sir Peter Bazalgette (Chair Arts Council England and Royal Television Society).

The h.Club100 is The Hospital Club’s annual search for the most innovative and inspirational people working across the creative industries over the last 12 months, this year in partnership with Creative Industries Counciland fuelled by Monticello. The awards showcase creative excellence and recognise talent across the full breath of the UK’s creative industries.

The final 100 are announced tonight, 1 October 2015, at an exclusive event at The Hospital Club Studio hosted by Margherita Taylor in front of a select audience of winners, judges, media and sponsors. Each winner will be presented with a unique awarddesigned by Rachel Harding, a London-based product designer who was selected for the h.Club Foundation’s Emerging Creatives scheme.