August’s Wac Arts star of the month is Harriet Cox! 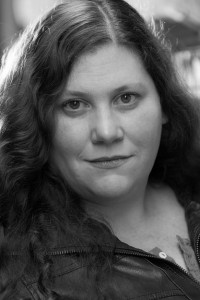 “They say when you arrive at Wac Arts you never leave and I think that’s true,” says Harriet, which is very true in her case. Harriet Cox started as a Wac Arts student in a two week summer programmes and then joined Senior Wac Arts. After attending Senior Wac Arts for some time Harriet went off and pursued her interests elsewhere, but when she needed professional retraining in the arts, Wac Arts came up on Google! Harriet came to Wac Arts to join the Diploma program 25 years after attending the summer program. She says that Wac Arts gave her the skills in dancing, singing, and acting to go out and start her career. After her graduation performance, the assessor of the college said that this performer will get a job instantly. Harriet did not disappoint since she had her first professional job the Monday after her Saturday graduation performance!

Now Harriet has just started a new show called “Housed” with the Old Vic Community Company. The Old Vic Community Company is comparable to Wac Arts since it accepts participants from every background. They have a not-for-profit project called “The Mono Box,” which gives actors and directors access to a unique collection of 350 plays. This helps actors find monologues and scenes for auditions or showcases. If you are over the age of 16 and based in London then you can take part in writing, performing, and producing. No experience needed yet the whole cast of Housed were extremely talented actors and enthusiastic about the opportunity to perform at the Old Vic. 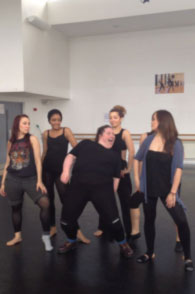 “Housed” is their summer production and the cast has been researching the housing in London. They listened to housing workers speak about the issues and have read and listened to testimonials from the struggles of real people. David Watson is the writer of “Housed” and according to Harriet has put together a great script displaying these struggles. Only 30 people were selected to be a part of the cast for the first show from the 1,281 people that auditioned. Each actor has a remarkable amount of talent, and they all have wide range of ages and backgrounds. The show sold out within 24 hours!

Furthermore, Harriet continues to work for Wac Arts, She does everything from being a receptionist to helping out in Wonder Wac and has been employed at Clerk to the Governors for Wac Arts College which opens in September. Whilst Harriet continues to support Wac Arts and is commited to Wac Arts ethos, she has also has great plans for the future! This includes involvement in singing, writing, and possibly collaborations in the arts as well as setting up her own Theatre company. Harriet really seems to be passionate about everything she does, and it is reflected in her work.

Read the interview below to find out more about Harriet’s fascinating story!

Interviewer: “How did you start coming to Wac Arts?”

Harriet: “Well, 25 years ago I did a summer school for two weeks and I did join senior Wac at that time. However, I couldn’t keep coming because of life. Then in my mid-thirties about five years ago I was looking to retrain as an actor singer and I just typed in accredited musical theatre course and up came Wac Arts. I was like ‘I didn’t know they had a course.’ I applied I spent two and a half hours persuading the head of drama to give me a go because I had never danced a day before in my life and they let me on.”

Interviewer: “How long have you been involved with Wac Arts?”

Harriet: “The last 5-6 years and I have done everything from being a student to being a volunteer. I have worked on different projects I have been an administrator, been a student, and been a receptionist. I think they are just kind of like ‘oh yeah Harriet will do that’ and I will.”

Interviewer: “How long did you attend the school portion to Wac Arts?”

Harriet: “I did 3 years training on the professional diploma and musical theatre and it was brilliant. It was the hardest thing I have ever done, but also one of the most fulfilling.”

Interviewer: “What program and/or classes did you participate in at Wac Arts?”

Harriet: “I participated in Senior Wac Arts, and a two week summer school. Then I didn’t do anything in the period since those. I came back as a student on Diploma, 25 years later. They say when you arrive you never leave and I think that’s true.”

Interviewer: “How has Wac Arts helped your career?”

Harriet: “The best thing about the Diploma, or one of the best things, is that they teach you the skills then it’s up to you on how to use them. So you aren’t herded into this very small kind of bracket where you are now a west end Musical Theatre performer. You have the skills for singing you have the skills for drama and you have the skills for dance and it’s up to you on how to use them to create your own career. The other thing is that so many of the teachers are from the industry that you are almost networking the entire way through. I still have conversations with people who taught me, who will give good advice at timely moments. They come see things you are involved in, and even put you forward for things they hear about. This is great and I know it is. I started writing and I know that there are people that I can go to and get an honest answer, because they are in the industry. They know what will work and what won’t.”

Interviewer: “After Wac Arts what did you start out doing?” 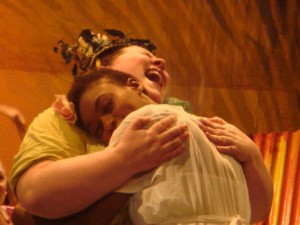 Harriet: “I finished my final years show on the Saturday night, and through a tutor from the Diploma programme, I went straight into my first professional job on the Monday, So it was out of the frying pan and into the fire! I got offered another show after that. Then I had a little break which was handy. Now I have been doing new pieces of theatre and new musicals.
I was doing some volunteer work in the recording studio here and got an opportunity just from answering the phone. I did a microphone check and got put on a track, which has just been released. Now I am involved in the Old Vic Community Company, which is a three year project. Its first night is tonight! I am bit excited! It is all going to be fabulous and it is really exciting. I even get to perform on the Old Vic stage. First time of many I hope!”

Interviewer: “What led you to the part at Old Vic Community Company?”

Harriet: “A fellow receptionist, who attends classes here, mentioned what the Old Vic was doing. I had heard of the Old Vic before, but it was the first time they are doing the company idea. I went to the auditions and 1,281 people auditioned! Since there were so many people they ran three rounds of auditions. First a workshop, then if you were chosen from that you had 24 hours to prepare to perform a monologue on the Old Vic stage. Then they formed a company, and from those in the company they selected people for the first community play. It is called ‘Housed’ which is all about housing experiences in London. The struggles housing can cause whether you are single, in a family, or from outside the U.K. It really shows how important home is. I felt very privileged and lucky to get through all the rounds and the cast are fantastic. Everyone is so lovely and that’s what I cannot get over. It is like ‘was that part of the audition criteria that everyone had to be lovely?’ Everyone is just so nice and easy to get on with.
It is quite amusing that I have been cast ‘mother.’ When I was on the course here they said ‘Oh well your casting is social worker/nurse/prison hard nut/mother’ and I was like ‘okay because I have experience in none of those areas.’ Interestingly enough we had selection of pieces for the second round of auditions and I immediately crossed all the male ones through. Even though I have played men half the time, I chose the mother one. I was cast as ‘mother.’”

Interviewer: “Now that you have graduated Wac Arts, how do you still help Wac Arts?”

Harriet: “I am the clerk for the new Wac Arts College, I work on reception, I am a volunteer, I am an assistant tutor, I help with project administration, I have helped design databases, and also I have done a couple residential visits with the Wonder Wac program. I am going to train as a mini bus driver soon. I am just quite good at being the extra pair of hands. ‘Who can we rely on? Oh, Harriet!’”

Interviewer: “How come you wanted to continue your relationship after graduating Wac Arts?”

Harriet: “I think I just fell into it. During my course I had already been volunteering as an assistant tutor and administrator. So I just continued in that because it was a really good learning experience. I was learning a lot. Particularly from the teaching and I recognize a lot of performers have to and want to teach a) to pass it on to the next generation and b) to support themselves. Everyone has to pay the rent. You can’t just sit at home and do nothing. It has affected my own development as a performer, because I am a natural imparter of knowledge anyway. It was just an opportunity to a) give back to Wac Arts and b) improve my skills. You can only teach something when you really understand it. I think trying to teach something helps you recognize what you know and what you don’t know. I also love working with young people, it really keeps you young!”

Interviewer: “What do you have planned for the future?”

Harriet: “Well, the really great thing about the Old Vic community is that everyone there is so talented. There are people from across London that might be interested in drama that are not necessarily trained and everyone is so talented. It has kind of revitalized my ‘so what are you doing about this career thing and acting singing and music.’ I’ve already got plans to get back out as a singer, to record my song reel. To do some more work on my writing, and to get re-involved. I think it is very difficult to strike a work balance, when you’ve got sort of 5 jobs. Then you are trying to pursue a different career entirely. ‘Okay I’ve paid the rent now, let me get back out there.’

I am hoping that maybe there will be some collaborations that arise from involvement in the Old Vic Community Company. Since it is not just the play, it is workshops, boot camps, master classes, and tickets to shows. It is really just a fantastic opportunity so I am hoping to make the most of that.”

previousDanny Sapani pn Penny Dreadful
nextJourneys Beyond gets a 4-star review in the Edinburgh Spotlight!