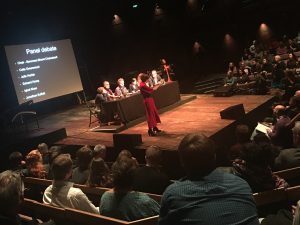 WAC founder Celia Greenwood sat on a panel for Act for Change earlier this month, along with Casting Director Julie Harkin (This is England 90, War and Peace), Edward Kemp (Director of RADA), Director Iqbal Khan (Theatre Director)and Jonathan Suffolk (Technical Director at the National Theatre). The panel aimed to frame a public debate on diversity in UK drama schools – Wac Arts was held up as a best practise institute, with Celia Greenwood saying “Since 2003 on Wac Arts professional training we’ve had more BAME students than white. It can be done.”

Chaired by Baroness Shami Chakrabarti it was a lively discussion, with plenty of voices from the audience joining in. Head of Enrichment Steve Medlin said, “It was a really interesting afternoon of discussion – It’s brilliant to be held up as a good example of diversity within performing arts training and we will continue to strive to break down barriers.”

What does Act For Change Project say about themselves?

What is The Act For Change Project?

The arts are for EVERYONE, regardless of race, gender, class, sexual orientation, age or disability, and they should reflect the societies we live in.

THE ACT FOR CHANGE PROJECT is a registered charity. We campaign for better representation across the live and recorded arts.

Find out more at www.act-for-change.com