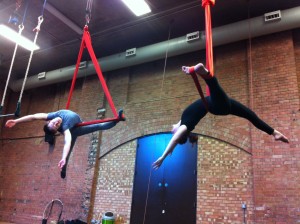 Why does it feel like this term’s flown by on the Wac Arts diploma? Because the students have crammed so much in there’s been no sitting around.

From the moment we welcomed our new cohort of fantastic first years in September, it’s been full pace all the way.

Masterclasses this term included an audition workshop from the esteemed West End director and choreographer Jonathan Buterrell, a directing class led by the former National Theatre director Nick Hytner as well as drama lessons from The Curious Incident of the Dog in the Night-Time star Indra Ove.

Getting stuck into the aerial technique training that now forms part of the course meant students got to grips (literally) with the equipment and skills that give you that flying feeling.

We’ve had a visit from the Swedish public TV who filmed students at work for a piece on our diploma for their education programme – watch this space for broadcast news. 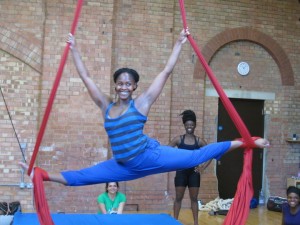 On the performance front our students took to the stage to sing at the Hampstead Christmas Fair alongside some high-octane afro-fusion dance led by diploma alumna Patience James. First and Second years shared new work with a show of original folk songs, devising and contemporary drama while our third years performed abridged versions of Rebecca Pritchard’s Yard Gal and the play Mules to a sell-out crowd at the Etc Theatre Camden.

It’s amazing to think what 2016 will bring if this is what the students can rustle up in the first term.
For a glimpse of what’s to come: we’ll be auditioning for the diploma on February 21st (get your applications in now), performing at the swanky Oak Room of the Hospital Club in Covent Garden on March 24th and then bringing the annual final production to the stage in July.

And that’ll just be the start of it…