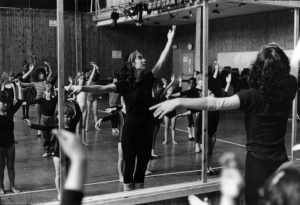 After ten years as part of the core team at Wac Arts, Martha Stylianou will be stepping down as Course Coordinator / Head of Dance for the Diploma at the end of this month. After arriving at WAC (as it was previously known) as a student 39 years ago when the doors opened, and then returning as part of the ACE Artists Development Initiative in 1990, Martha is leaving to further develop her own practice around injury prevention which she has been building over the last 10 years and to reconnect with her first love – dance. However this isn’t really a goodbye – we’re happy to announce she’ll be back in the first instance working on the dance assessments, auditions day in May and on the third year Diploma in Professional Musical Theatre summer performance at the Cockpit Theatre in July.

Chief Executive Karen Napier said, “reading Martha’s leaving card was a real testament to the many friends and colleagues she had made over a life time at Wac Arts. We are so pleased that Martha will be back from May contributing to the future of Wac Arts in new ways”.

We celebrated Martha’s time at Wac Arts with tea and cake this afternoon, during which our young people performed a beautiful musical farewell, which you can watch below.

If you're passionate about supporting the development of young people with SEN then have a look on Arts Jobs at our vacancy for an Officer for Buddying, Advocacy and Transitions bit.ly/37xHYzL #WacArts #DiversityMatters pic.twitter.com/LD2aq0lgVL

We need to be amplifying the voices of young people who are facing unique challenges in the face of the pandemic. Joel from Wac Arts explores some of these challenges in his film created in partnership with Fitzrovia Youth in Action @FYAonroad vimeo.com/461902977

Know your Jordan Peele from your Ava DuVernay? If you're a film enthusiast, sign up for our Video Production classes for ages 11+. The class is two hours each week where you'll be developing video and production skills. Apply online > bit.ly/2SGxRQb pic.twitter.com/VEdk9jv7ri

.@CamdenCouncil are offering residents of all ages the opportunity to realise their potential through a range of life-changing scholarship opportunities, with fully-funded University courses starting autumn 2021 > bit.ly/2HalzgL @BirkbeckUoL @Hult_Business

Wac Arts is hiring! If you're passionate about working with young people with SEN then have a look at our vacancy for an Officer for Buddying, Advocacy and Transitions > bit.ly/2HaPNjP #WacArts