Talented Wac Arts students and graduates are currently performing to rave reviews at the prestigious Edinburgh Festival! With full houses at the Radisson every night, they’ve been out and about, getting people excited about the show, drumming along the Royal Mile and making themselves known to all! People have been stopping them in streets saying how good the performance is! 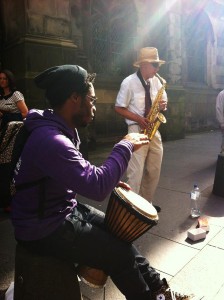 The British Theatre Guide say, ‘This committed cast give strong, confident performances that are a delight to watch in a witty and engrossing play’; ‘… a compelling, original perspective on exile, conflict and learning what it means to be home’ say Broadway Baby.com.

The play they are performing, A Concrete Jungle Full of Wild Cars by Mariama Ives-Moiba, was selected as winner of the Trinity International Playwriting Competition. A gritty play about three teenagers who have fled civil war in Sierra Leone, the action switches back and forth between Sierra Leone and the experiences of the young refugees sent by their parents to contemporary London.

An especially celebrated group, their production was so well received earlier this year that the international examinations board, Trinity College, is sponsoring their week long run on Edinburgh Festival’s famous Royal Mile. The production is directed by Che Walker, a Wac Arts alumni and award-winning playwright.

Playing until 10th August, catch them if you can at:
Radisson Space Two,
Raddison Hotel, The Royal Mile, Edinburgh EH1 1TH