‘Best of the Best’ Diploma Showcase at The Hospital Club 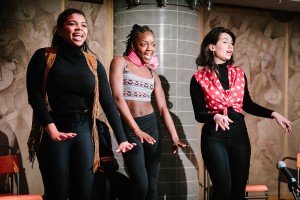 The ‘Best of the Best’ Diploma showcase at The Hospital Club certainly lived up to its name on Thursday 24 March. Featuring a vibrant mix of monologues, musical numbers and theatrical scenes, the five confident young actors held the audience spellbound. Moving effortlessly between tragedy and comedy they took us seamlessly from the villages of Africa to the streets of New York. They were watched by guests including Wac Arts alumni, supporters and casting agents and all agreed that Ema Unguru, Reeva Christie, Nesah Gonzalez, Ivy Hunter and Kandaka Moore put on top notch performances in the intimate and sophisticated surroundings of The Hospital Club. 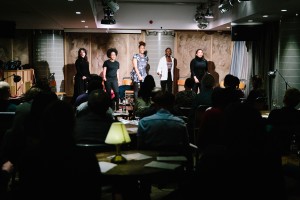 In an evening of highlights, Kandaka and Ivy performed against volleys of audience laughter in their scene from Oscar Wilde’s The Importance of Being Earnest which they transported from Victorian London to the villages of Africa! In contrast Reeva’s dark and difficult monologue from the film Precious moved us to tears. The monologues were balanced by some great musical numbers, including Ema’s Daddy’s Son and Nesah’s Moonfall. Steve Medlin, head of drama, said “It was a wonderful opportunity for the students to perform in a venue close to the heart of the professional industry and afforded them the chance to sit in the intimate space with professionals drawn from the world of TV and film which allowed them to show their talents as emerging artists.” 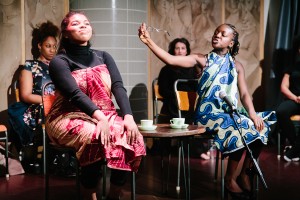 In October last year Wac Arts was awarded the h.Club Foundation Philanthropic Award, which aims to recognise a UK creative charity which has made an outstanding contribution to supporting youth employment and education projects in the creative industries. Our evening showcase provided the students with the invaluable experience of performing in one of the city’s foremost spaces for creative industry and of showcasing their talent to industry professionals.

We believe we’re going to see great things from these individuals as they graduate from the Diploma in Professional Musical Theatre. All in all it was a wonderful evening of talent and we’re now wishing them the best of luck in their preparations for their end of year production at the Cockpit Theatre on the 7th, 8th and 9th of July.